What Is The Universal Declaration Of Human Rights?

By Admin in Our Projects on 29 September 2016
No comments 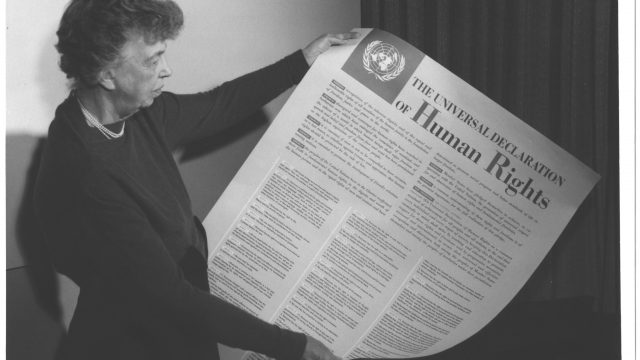 Following the atrocities of World War II and the international community’s resolve that nothing so awful can be allowed to happen again, the Universal Declaration of Human Rights (UDHR) was designed to complement the United Nations Charterand provide a road map of the rights of all people around the world.

The drafting committee was chaired by American diplomat Eleanor Roosevelt and consisted of 18 members from various political, cultural and religious backgrounds. The British Representative was Charles Dukes, a trade unionist and Labour politician and David Maxwell-Fyfe, a British Conservative MP and lawyer, was alsoinvolved.

The drafting committee met in two sessions over two years. It considered human rights documents from all around the world, including the Sankey Declaration on the Rights of Man, named after the committee chairman, Lord Sankey. That declaration was originally drafted by great British writers including (primarily) H.G. Wells, along with A.A. Milne, J.B. Priestley and others. It distilled key human rights principles and was closely followed in what became the UDHR. The drafting committee for the UDHR also considered a detailed report on the prosecution evidence at theNuremberg trials of Nazi war criminals.

A draft of the Universal Declaration was prepared by René Cassin, a French jurist, law professor and judge, for which he was awarded the Nobel Peace Prize in 1968. Over 50 member states participated in its final drafting. Of the 56 UN member states at the time, none of them opposed the adoption the UDHR, although eight states didn’t vote.

So, what does it say?

…[R]ecognition of the inherent dignity and of the equal and inalienable rights of all members of the human family is the foundation of freedom, justice and peace in the world…

The UDHR sets out certain core human rights principles, including universality (they apply to everyone), interdependence (they interact with each other), indivisibility (they cannot be separated from each other), equality and non-discrimination. The UDHR also shows that the concept of human rights recognises both rights and obligations.

The first two articles of the UDHR emphasise its universal nature, providing that ‘all human beings’ are entitled ‘without distinction’ to the rights proclaimed. Then the UDHR focusses on the ‘substantive’ rights we are familiar with: the right to life, prohibitions on slavery and torture, the right to a fair trial, and the rights to privateand family life.

You can see the desire to respond to the wickedness of the Nazi regime reflected in many of the UDHR’s articles. For example, Article 2 UDHR, which prohibits discrimination, addresses the Nazi’s ‘master race’ ideology. Article 3, guaranteeing the right to life, had originally included an exemption where the taking of life is ‘prescribed by law’, but this was changed as many Holocaust deaths had resulted from valid laws. The fair trial rights were included to address corrupt courts, such as those packed with Nazi judges to enforce Nazi laws.

How does the UDHR work?

Member States have pledged themselves to achieve, in co-operation with the United Nations, the promotion of universal respect for and observance of human rights and fundamental freedoms…

The UDHR is not a legally binding treaty. At the time of the UDHR’s drafting, British representatives were frustrated that it had no legal, as opposed to moral, force. But many international lawyers now believe that it forms part of customary international law (that is, laws that have developed through custom, rather than by formal agreement).

On 1 January 2009, the UDHR became the Guinness World Record’s most translated document – it was then translated into 370 languages, but it’s now up to478, showing that it truly is the most ‘universal’ document in the world. The UDHR’s adoption is celebrated on 10 December each year – which is nominated by the UN as International Human Rights Day. Last year, RightsInfo celebrated with this post.

You can read the full text of the Universal Declaration Of Human Rights here.

And you can read Eleanor Roosevelt’s speech to the United Nations – The Struggle For Human Rights – here.